As your company expands, new responsibilities will arise that demand different skill sets than you or your current staff have. A consultant is a third-party specialist who is recruited for their subject area expertise. They are contract-based external personnel who must complete duties within a certain time frame.

Consultants have the advantage of being niche-specific, having earned competence through performing similar work in similar sectors over time. As a result, they are more skilled and experienced in their field than conventional employees.

A consultation agreement is an agreement signed between a person seeking a certain advisory service and firms or individuals who provide such services. It involves a customer and a consultant. An agreement specifies the terms of the service for which consulting is being performed as well as the way by which the consultancy service will be performed.

This kind of agreement specifies the services that the supplier will render as well as the project's schedule and payment terms. Most service agreements typically include a list of each party's obligations and rights, as well as restrictions on confidentiality and liability. Many also talk about how disputes will be resolved if either party violates the contract.

A service offering is made up of one or more service promises that specifically identify the type of service being provided in terms of its scope, availability, cost, and packaging options.

Through service offerings, customers can select from a variety of features and performance levels for a certain service.

An intellectual property rights agreement is a binding legal instrument that specifies who owns an individual or organization's ideas, inventions, and works of art. By clearly stating who is in charge of different sorts of content, it safeguards owners from copyright violations and other intellectual property offenses.

A non-compete clause, also known as a non-compete agreement or non-competition agreement, is a provision in an employment contract that requires an employee, upon resignation or termination, to promise not to compete with the employer for a predetermined time period and place. These kinds of employment agreements also forbid the employee from disclosing business information or trade secrets.

The exchange of consideration is the main advantage of employment contracts. The employee will lose the possibility to apply for certain jobs after quitting the workplace, but they will also have the chance to be compensated for their compromise. To protect their market advantage, employers may demand that workers sign non-compete agreements.

Non-solicitation clauses are enforceable provisions in contracts that forbid approaching another party about a deal. They are most frequently employed in non-solicitation provisions between businesses or individuals to forbid them from contacting clients and workers. It keeps rivals from "poaching" their most skilled workers or lucrative clients, which is beneficial to many businesses. A non-solicitation stipulation is often agreed to when a contract is first signed.

A non-solicitation agreement is used to safeguard a company from important personnel or contractors being taken by rivals, clients, or other parties. Losing their talent could have a serious negative impact on the company.

A contract's modification clause specifies that an agreement can only be changed in writing. As crucial as it is to have your contract in writing, it is also crucial to demand that all amendments, including additions, deletions, and phrasing changes, be made in writing.

Any prior agreements that may have existed between the parties are superseded by a contract that contains an entire agreement clause. It is crucial to make it clear in a contract that only the provisions that are expressly stated therein are legally binding and that the parties should not be expected to be bound by the terms of either prior agreement. The simplest approach to stating that earlier agreements are no longer valid is to use a clause that refers to the entire agreement.

A complete agreement provision can make it obvious to both parties that the agreement clearly outlines the responsibilities and that they are not obligated to perform commitments that are not laid out in writing. Additionally, these provisions forbid the parties from attempting to hold one another to representations or promises made before the contract's writing and execution.

The conditions under which the contractual parties will conduct business are outlined in a commercial contract. However, depending on which nation's laws apply, those terms may have quite different meanings and effects. A controlling law clause serves to specify the parties' preference for the applicable law.

Contracts and agreements often contain governing law terms, also known as choice of law clauses, which specify the laws that will apply to the transaction in the event of a dispute. They are common provisions included in agreements and transactions involving businesses.‍

‍
1. How do I write a consulting contract agreement?

2. Who are the parties to a consultancy agreement?

The Consultant and the Company are each hereinafter referred to as a “Party” and collectively, as the “Parties”.

3. What is a consultancy services agreement?

The consultant and the company enter into a consulting agreement. It specifies the scope of their employment and other terms and circumstances associated with their appointment in the organization.

4. What is an independent consultant agreement?

A working connection is established between an employing firm and an individual contractor through an agreement. Binding legal written contracts are intended to establish clear and precise expectations, protect both parties' interests, and avoid misconceptions about employment classification.

5. What type of contract is a consulting agreement?

A consultant must have expertise in a specific area or subject matter. The word 'consultant' comes from the Latin word ‘consulttare’, which means 'to completely consider, to enquire.'

The term "consultant" can refer to both firms and individuals that provide consulting services. Because their knowledge and skill sets are frequently highly specific, consultants are frequently compensated at least double the hourly wage of a generalist worker with a similar set of talents. 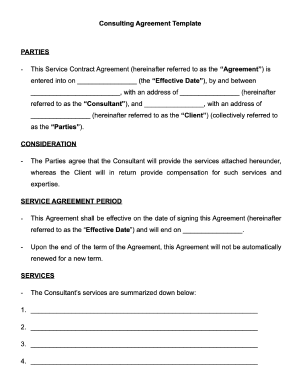