How Signeasy got Featured in an Apple Campaign (and almost screwed it up!)

Signeasy was a two person operation in 2010, the year we launched. And bootstrapping meant a lot of pressure first on gaining and then on maintaining traction; there was, and still is, no safety jacket. If we have no money to pay salaries and run operations, there is no company or product, period. But we have been lucky, and successful enough to be profitable.

Today we have grown into a 15 member team, and Signeasy is now among the most successful apps on iOS and Android.

As more and more paperwork moves to the cloud, we are extremely well placed to help individuals and SMBs use eSignatures, and in turn, save paper and a lot of time and money in the process.

What we think about a lot

Innovation and customer happiness, that’s our mantra. An app like Signeasy is passing through a quality check every time a customer uses it. Which means any and all feedback is in real time, giving us the data we need to keep innovating and to keep the customer happy.

Our almost continuous updates and fixes to leverage Apple’s iOS strengths (such as our iOS extension and Touch-ID support), and to bring more capabilities to customers is due to this ruthless focus on user experience.

The mail from Apple

These priorities are what I believe got us noticed by Apple.

Early April this year, something popped up in my inbox. It was a mail from Apple’s marketing agency about featuring Signeasy on their upcoming iPad summer campaign. Needless to say, we were overjoyed. Though branding with an Apple ad was one reason for our excitement, there was a significant business angle as well — iOS accounts for 85% of our paying users, and Apple’s early adopters, the people who appreciate a well designed product, had always been our own champions. Apple wanted secrecy, they specified that no major changes should be introduced to the UI and product screens throughout the campaign, which would have made the ad rendering dated.

We agreed, and complied within a 48 hour window. We couldn’t control our excitement. After all, this was the ecosystem we had been nurturing for some time. This recognition was the ultimate feather in our cap. It was all about that important word we kept hearing about in startup conferences and funding events all around the world — validation. Then we went back to our work mode with fingers crossed, looking forward to hear back from them in the near future.

Until it all went wrong.

It was the 4th of May. A routine update for iOS went wrong and our users were unable to sign documents. We were devastated. We apologized to our customers immediately, and by May 6, had expedited a fix that went live that very night, restoring full service back to our users. It had taken a day and a night of non-stop work, but we had fixed the issue, and we heaved a sigh of relief.

Several users were happy with the way we handled this. 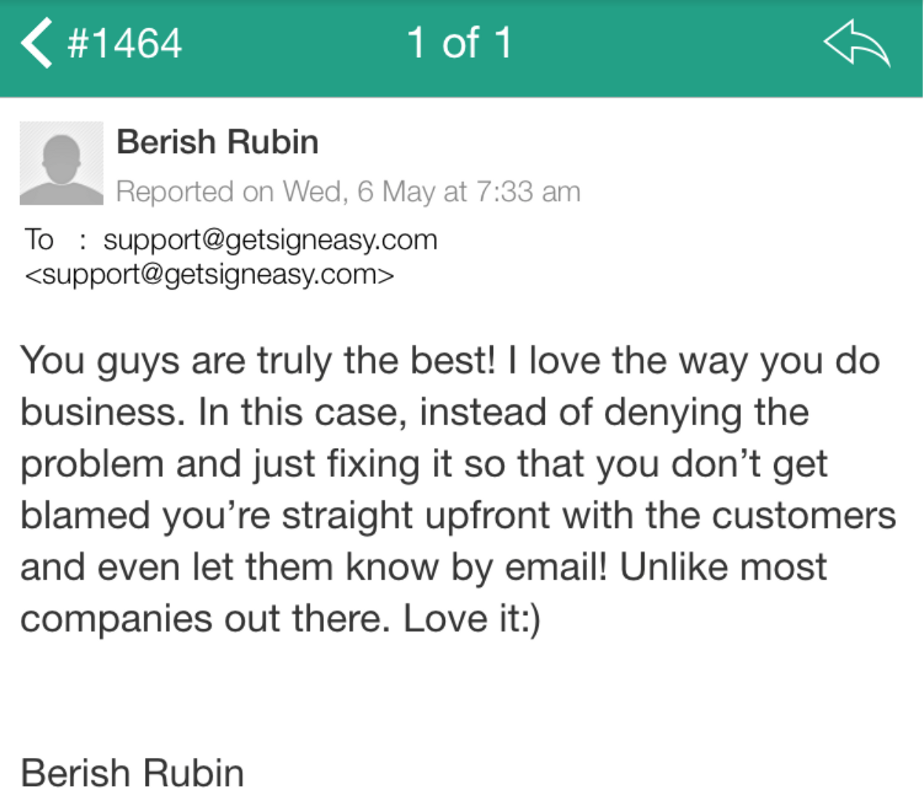 Little did our users know that we were running against time, as May 7 was the day the iPad campaign went live. A lot of interest would be heading in our direction and needless to say, it wouldn’t have been very impressive if the app had been down on that very day.

The point I want to make here is that this experience again underlined to us the uniqueness of the lean, nimble startup model that we follow, despite being a five year old bootstrapped company. Our users have never had a reason not to trust us, and neither did Apple. As partners and owners of the ecosystem we are part of, it was imperative not to disappoint them, and we are proud we did not. The work that we put in to get the app working for our users again, the small colors and buttons we test and change to enhance usability, the late night frustrations with pizza delivery — these are things our users will never see, and that is by design.

It makes us proud that all this behind the scenes work reflects on the little screen in our users’ hands, and that they enjoy it enough to say that they love it.

Head over to this Youtube video where Signeasy’s ease of eSignature is being showcased by Apple.

and other apps listed in the small business section by Apple:www.apple.com/ipad/change-everything/.

Part 2 of this post will talk about the actual gains that we had by being part of the Apple campaign. There are going to be metrics, and a lot of takeaways for app store citizens like us. So stay tuned!

If you have an interesting story to share and exchange notes on how you got featured in App Stores or just want to say hello, drop me a note at spatro At getsigneasy Dot com.
This post originally appeared on Medium.