A decade of Signeasy. It’s our double-digit birthday!

Today, Signeasy is blowing out 10 candles.

That’s an entire decade of bootstrapping our way to greater heights than we could have ever imagined. A decade of building industry partnerships more valuable than pure gold, a decade of finding “our people” to build the all-star dream team we have today, and a decade of relentless innovation to serve our users even better.

In an age of VC-funded tech firms, Signeasy is a homegrown success. From its beginnings as a two-person team trying to modernize an outdated signing process to its status as a Microsoft Accelerator company, Signeasy has remained independent – there are no external investors or shareholders guiding our process behind the scenes.

We are celebrating 10 years of helping users sign an offer letter for their dream job, close on their first home, onboard volunteers for their non-profit, get that huge sales contract signed on time… the list goes on.

In one sense, the numbers we’ve achieved speak for themselves:

But nothing makes the Signeasy team happier than receiving this kind of feedback from our users every day:

“Oh this app is amazing! Such a lifesaver and so easy. Especially when it comes to the pandemic, it has been a huge help signing and completing all forms and documents for my daughter’s new school registration consisting of 13 forms.”

“We were in the middle of an expansion. We spent a lot of time setting up e-commerce. And with e-commerce comes a lot of signing too! Notary was the most difficult part, and that’s where Signeasy came in. We would do a video call with the notary, hold our documents and our driver’s license, sign and send the form and they would sign it and send back. Signeasy saved us!“

The world is in the midst of a crisis, and we’ve done everything we can to help our customers, NGOs, healthcare facilities, and educational institutions make a difference. By providing free access to Signeasy for small businesses in need, users were able to keep their operations rolling with remote, contactless document processing.

No birthday is complete without a little reminiscing and nostalgia, so we’d love for you to join us for a stroll down memory lane.

With 10 years behind us, let’s raise a glass to the memories and milestones near and dear to our hearts.

We owe it all to our intrepid CEO, who found himself unable to sign a job offer letter while on holiday in Mexico, away from his computer. His solution? To build his own solution.

A little less than one year after a lightbulb appeared over our founder’s head, Signeasy launches on the iOS App Store. 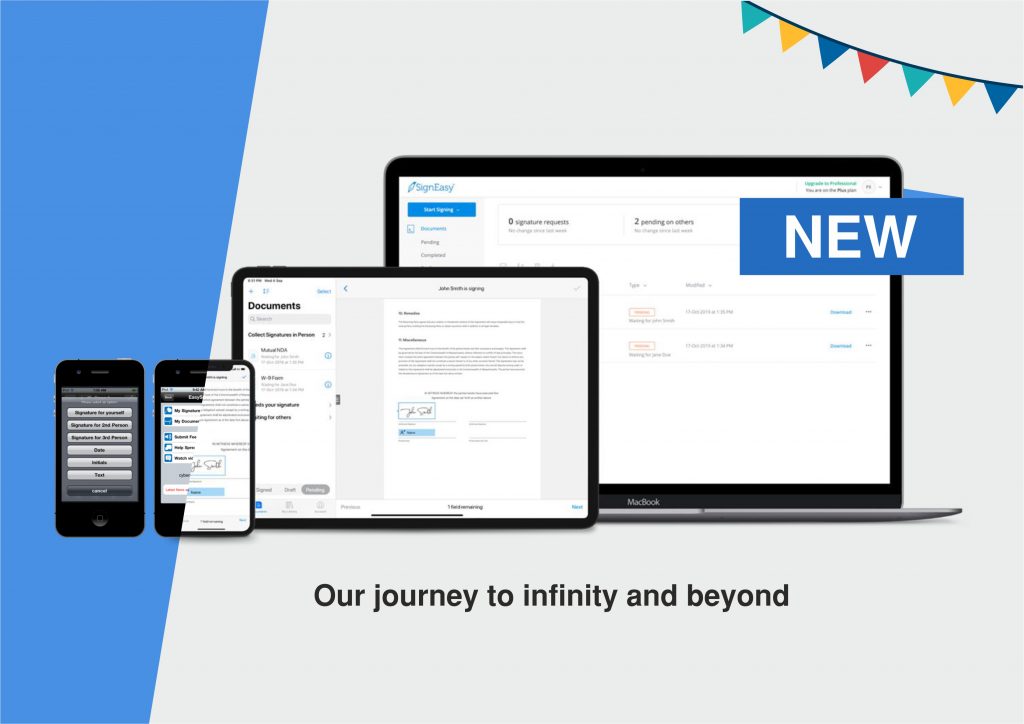 With a year and a few months of coding, developing, and testing under their belts, our developers release Signeasy on Google Play.

We rebranded to our new name Signeasy, reflecting the company’s mission to provide the most seamless device-agnostic eSignature solution on the market.

As Signeasy grows and thrives, Apple takes notice and recommends us as one of their “Top 10 Essential Business Apps”.

Now, users can secure and authenticate documents with biometric authentication for even more peace of mind.

Proud moment alert! Signeasy’s iOS app reaches the #1 spot among the top grossing business apps in the US App Store.

May 2015: Spotted in the iPad campaign

Apple uses Signeasy to showcase how easy it is for SMBs to adopt eSignatures, featuring us in their “Everything changes with iPad” ad campaign.

With Signeasy already available on mobile, we launch our desktop web app, allowing users to complete paperwork on absolutely any device.

It’s been a long road, and our hard work is truly paying off: this month, we reach 5 million app downloads!

With our new eSignature API, partners can integrate all of Signeasy’s capabilities into their own apps and platforms.

We kicked the year off with a bang, crossing the 6 million download threshold in January. Can’t stop, won’t stop.

February 2019: We speak your language

Signeasy goes global with support for 24 languages on mobile, including left-to-right scripts.

The Signeasy Gmail add-on is featured at Google Next!

November 2019: Love from a partner

Signeasy is named an Apple mobility partner, joining the ranks of other premier workflow solutions.

That’s a lot of ink, paper, and hassle saved!

Signeasy is named as one of Aragon’s most prominent innovators in Digital Transaction Management.

The snowball is officially rolling: it took us 7 years to get to 5 million installs, and just 16 months to rack up 2 million more. That means our growth rate has doubled over time!

May 2020: 1 million requests for signature sent

Celebrating 1 million documents that were sent out for signature using Signeasy.

Next up: we can’t wait to find out.