Signeasy is now a Recommended for Google Workspace app

As a lender, the lack of a promissory note could mean there’s no evidence or contract that you were ever owed repayment of debt at all. That could be a significant amount of money gone in the wind. As a borrower, no concrete promissory note means you could be paying more than you owe, or you could even find yourself sued for a supposed default that never happened.

What is a promissory note?

A promissory note is legally binding and outlines a “promise to pay” between a borrower and a lender. A promissory note must be signed by the borrower, it must outline the sum of the debt, and it can specify more detailed loan terms if both parties agree.

For a promissory note, there’s no need for a witness or notary (though, neither is a bad idea).

A promissory note differs from an IOU by being more formal.

An IOU, which the borrower signs, simply acknowledges the sum total of the debt. On the other end of the spectrum, an official loan agreement is a separate contract that is more complex and regulated. Unlike an IOU or a promissory note, a loan agreement must have the signatures of the borrow and the lender, and it must include a detailed plan for payments, interest rates, and consequences, should the borrower default.

Unsecured promissory notes are much simpler: the only real consequences of a default or other nonpayment would be to the borrower’s credit score. And, of course, the debt could go to collections and eventually a civil lawsuit (if the lender chooses).

When should I use a promissory note?

If you’re dealing with a bank or a mortgage company, you probably don’t have to worry about a promissory note. They’ll be providing contracts, and you’ll simply be reviewing them (ideally with a lawyer) and signing. You do need a promissory note for private investments and certain kinds of real-estate deals and for personal loans between individuals.

Personal loans might include vehicle sales between private parties, cash loans to family members and friends, or the sale of expensive equipment.

Investments that employ promissory notes generally involve cash injections to small businesses to help them with equipment, payroll, real estate, or other expenses.

Real-estate loans that use a promissory note usually take the place of a mortgage in special circumstances. Homebuyers who have trouble qualifying for a traditional mortgage can use a promissory note to enter an agreement with the current owner of the house. The owner of the house sets the terms of the loan, and the house being purchased becomes the collateral that secures the loan for the buyer.

Components of a Promissory Note

Required CLAUSES in a promissory note

A promissory note must contain the following clauses:

Definition of the parties: This clause must identify who the borrower is and who the lender is.

The sum of the debt: This clause will simply specify how much the borrower owes the lender, and it can specify the reason for the loan (though it doesn’t have to).

The signature of the borrower: The borrower must sign the promissory note to make it legal, but the lender doesn’t have to. For digital contracts, this section should include a spot for an electronic signature.

Optional elements of a promissory note

While these clauses are optional, it’s never a bad idea as a lender or a borrower to make the conditions of the loan as clear as possible. If the debt ever moves to a legal arena, clear and precise language can save you from an unfair judgment.

Default clause: This clause should detail what happens if the loan is never paid back—specifically, what penalties the lender can levy against the borrower. For a vehicle, the penalty would likely be repossession, while a piece of real estate would likely lead to foreclosure.

Repayment schedule: On what date is the sum of the debt to be paid in full? If the debt is being paid off in installments, this clause should clearly detail how much the payments are and how frequently they’re due. This clause should ideally let both parties know what happens after a late payment. Are there fees for late payment, are there a certain number of late payments that can be forgiven, etc.

Interest rate: This clause would be necessary for any promissory note that describes a debt to be paid with interest. Ask yourself the following questions when both parties are working out the loan (and the note): What is the percentage of interest? When is the interest compounded? A borrower needs to pay special attention to this clause.

Security and collateral: In a secured promissory note, this section defines the asset or assets being used to secure the loan and the circumstances of its seizure.

Co-signer area: For borrowers who may not have sufficient credit or collateral, a promissory note may have the option of a co-signer. The section would detail how the co-signer would share the responsibility of any fees or penalties accrued due to default or late payment. Again, if this is a contract being sent via email or any other digital method, this section would need a secure electronic signature.

Now that you know what clauses you might need or run into and how they’re used, let’s take a moment to talk about the possible loopholes and pitfalls you may run into as a borrower or a lender.

Promissory notes can be voided under certain circumstances

Like any legal document or contract, promissory notes come with their own landmines—we can help you find them before you draft or sign your promissory note. There are a few loopholes, errors, and misunderstandings that void a promissory note, and you should know what they are so you can avoid them.

Unapproved alterations: All changes to any terms of the note must be agreed upon by the debtor and the borrower, before or after signing. Proof of an unapproved change will void the note.

The loss or destruction of the original note: Suing a debtor is nearly impossible without a copy of the original note. This is why we’d recommend using an electronic signature service like Signeasy because all parties get digital copies of the promissory note, which can be saved and backed up.

Defining the debt in anything but money: Promissory notes aren’t for trades or bartering—you can’t promise your car to someone. If a promissory note doesn’t describe the principal of the loan in legal currency, the note is void.

Lack of a signature: It’s silly, but it does happen. Make sure the borrower and/or any co-signor has put a wet signature or a digital signature on the actual promissory note.

Find the laws about promissory notes in your region

In the United States, promissory notes are covered in the “Negotiable Instruments” section of the Uniform Commercial Code. We recommend perusing the language of the code itself if you’re planning on a close examination of a promissory note in the US.

In China, Article 177 and Article 194 of the Criminal Law of the People’s Republic of China discuss the legal ramifications of promissory notes.

In India, the Negotiable Instrument Act of 1881 defined promissory notes and still governs them to this day.

For most countries, the United Nations Convention On International Bills of Exchange and International Promissory Notes covers promissory notes (among many other things) and can be read in its entirety here. This is an excellent default resource for understanding the minutiae of promissory notes; the document is often used as a template for other nations. 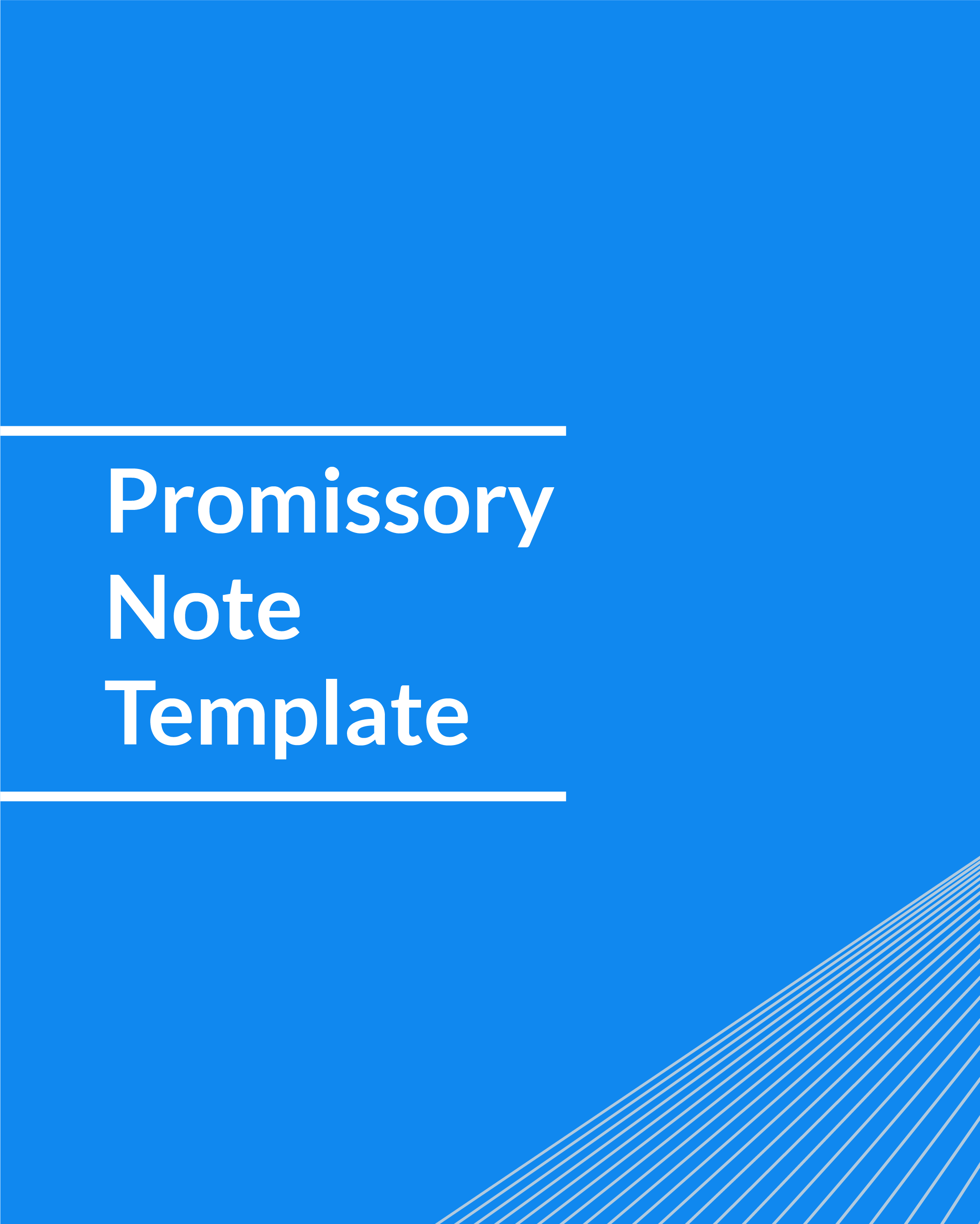