How to insert your signature in a password protected PDF document 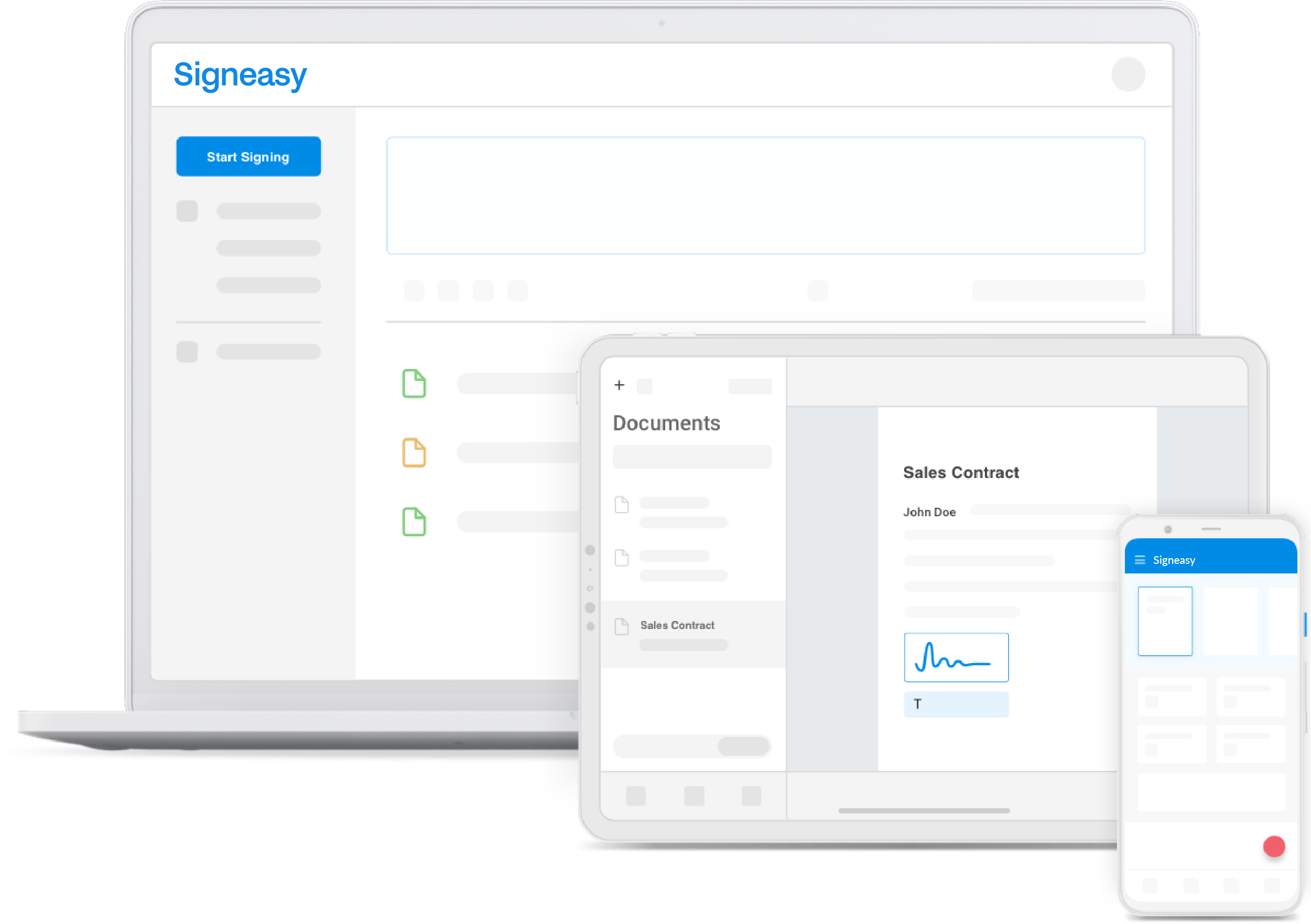 Encrypted PDFs are great for sending sensitive contracts online, but do you know how to sign a password protected PDF? It isn’t as easy as you might think.

Signeasy is the first – and, currently, the only – mobile eSignature solution that allows users to sign password-protected PDF documents. Now, all your important documents such as W-9 forms, real estate contracts, and confidential loan documents can be signed and sent within a few minutes, right from your cell phone.

We’re going to walk you through the importance of encrypted PDFs, how they differ from password-protected documents, and how to work with and sign a PDF document that is effectively locked down. We’ll also point you toward the software that can help you electronically sign encrypted PDFs on any platform you happen to be using, including those on mobile devices.

The challenge of encrypted signatures

At tax season, Signeasy was flooded with new users and new problems: Users were stalled on processing their tax documents.

The emails coming in had a common theme: encryption. It turns out that the root cause was that many of the tax-related forms were encrypted files for both viewing and editing, and thus were not supported by the Signeasy mobile app. And since mobile phones have become a viable platform for doing taxes, users needed a way to sign encrypted documents on the go.

Signeasy engineers set out to fix the problem, and we’re happy to announce that these password-protected files are now supported by the iOS version of Signeasy.

Check that your PDF is actually encrypted (not password-protected)

A password-protected PDF and an encrypted PDF are not the same thing. You need to know the difference to make sure your sensitive document or contract has the right level of protection.

Opening a password-protected PDF file requires a password, but the PDF and the content within are not encrypted. The passwords on these documents are easily bypassed or even removed, leaving the content both viewable and alterable by a malicious actor. These PDFs are less secure than encrypted PDFs.

All of the content within an encrypted PDF is scrambled (encrypted), meaning that even bypassing the password won’t make your data accessible.

In essence, the encryption and the password are two separate things in the case of encrypted PDFs, both of which would need to be cracked to access the data within. Using common hacker methods of stripping out the password would still make the PDF unintelligible without a way to decrypt it. Considering that it would take a supercomputer more time than the current age of the universe to crack a 128-bit encryption (which is one of the weaker encryptions used in SSL), that kind of breach is unlikely.

These PDFs, when encrypted properly, are extremely secure.

Once you’ve been given the password by whoever sent you the PDF, you can usually check the level of encryption in a standard PDF viewer by checking out the security details. This kind of information is mostly found in the File or Properties menu.

For most software, you can even search in the help bar for “security,” then follow the directions to find out how encrypted your PDF is.

Signing an encrypted PDF is tricky without help, and not always native to basic PDF viewers. Instead, you’ll need the help of software to sign it (and to ensure the signature itself is protected once you do).

While most basic PDF software includes a signing feature, the signature and the PDF are almost never encrypted—this means they don’t have security or accountability. To help encrypt and track all signatures for your PDF, you’ll want to use an eSignature suite like Signeasy.

The Signeasy app can be downloaded to your computer or mobile device. On mobile devices, there is both an Android version and an Apple version. Once downloaded and installed, you simply run the app, open the encrypted PDF, and sign the PDF. All of the hard work is done for you.

Every signature involved will be digitally audited (making them trackable) and encrypted with SSL encryption.

Adding biometric gates may also be wise, especially for contracts being signed on multiple devices. It adds another layer of security, which is never a bad idea.

What types of PDFs should be encrypted?

Not every PDF contract you send or receive needs a high level of protection, but most should probably be encrypted to protect you and any parties involved.

We’ve compiled some of the most common encrypted PDFs that you might need to sign, and the kinds of PDF you need encrypted.

Financial PDFs should be encrypted. Does the PDF contain financial data about any involved party, including bank information, account numbers, tax data, or any other information that could risk the assets of anyone involved? Encrypt it.

Confidential PDFs should be encrypted. Does the PDF contain anything that could be considered “trade secrets”? Encrypt it.

Legal documents, mergers, acquisitions, patents, copyright documents, manuscripts, screenplays, and any form of sensitive intellectual property should all be sent and signed as encrypted PDFs.

Medical consent forms, medical diagnoses, guardianship forms, and adoption forms are great examples of paperwork and contracts that might need to be signed and should be encrypted.

Encrypted PDFs can (and should) replace paper contracts

People are adopting new habits and new workflows, and modern encryption and eSignatures can facilitate these changes.

Signeasy not only provides a way for you to sign confidential, encrypted documents but also offers a user-friendly interface to keep those documents organized. Your contracts will be encrypted, your eSignatures will be tracked and secured, and you’ll be able to easily find all those contracts in the future.

Use a software like Signeasy to contribute to a more efficient, secure, and paperless world.

Get Your Free Trial Now!